Below is a summary of what the student did while on the course.

on Tuesday the 15th of February I travelled to Cambridge as part of Cambridge university, on part of a 4 day biology course, in where wed learn about medical research though seminars and shadowing.

Thought the first three days we spent half the day shadowing out lab supervisors in their labs, as they spoke about their research and the medical advancements going on at the institute.

In my lab specifically they were looking at how malaria gets into the red blood cells by the use of proteins. Their aims are to try and find how many proteins they need to remove from a malaria parasite before it is no longer able to penetrate the cells. They did this by altering and deleting genes.

For our roles within the lab, we were allowed to participate in an experiment. For my lab, we took altered parasite DNA and wild-type DNA , each sample having one with wild primer and the other with edited primer, and then we reproduced the parasites in the labs by PCR. After adding dyes to bind to the primers we passed them through gel electrophoresis to see if we had successfully made wild type DNA (left white line)  and edited type (right line)(the ladder on the furthest left is just to show movement of dye though gel as a control): 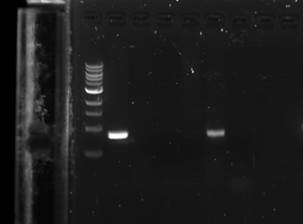 After doing the experiment, we had to produce a presentation for the 4th day on what we had done and present it to the other students and supervisors:

The rest of the day was broken up with interactive seminars where leading world scientists taught us about their specific fields, notable ones being on painlessness, kidney functions and potassium and nerve cells.

There was also tours across the institute where we where taught more in depth about microscopes and flow cytometry.

You can find Rosie’s  presentation attached below