530 years after being buried in an unmarked grave in Leicester, Richard III is finally getting the funeral he deserves. The last Plantagenet monarch will be laid to rest in Leicester Cathedral next Thursday, with a symbolic procession through Leicester where he will be transported by a cortege in a lead-lined oak coffin to the service attended by the Archbishop of Westminster and Cardinal Vincent Nichols on Sunday, 22nd March. Forming part of a monument to the king, his seven times great-nephew Michael Ibsen, who is a direct descendant of Richard’s sister Anne of York, has made Richard’s coffin, which will be a monumental block of Swaledale stone with a deeply incised cross, on a plinth of dark Kilkenny marble carved with Richard’s names, dates, motto – loyaulte me lie (loyalty binds me) – and his coat of arms. The current memorial in Leicester Cathedral, which was lifted out of the floor in Leicester Cathedral in August 2014, read: “Richard III, King of England, Killed at Bosworth Field in this county, 22nd August 1485, Buried in the Church of The Grey Friars in this Parish.” Along with the service, there will be lectures, art exhibitions, book launches, flower festivals, concerts of medieval music, fireworks and the first ringing of the new peal of bells composed for Richard – all of which will be held over the next week.

Richard III, turned villain by William Shakespeare’s play Richard III, has been thought lost to history until several historians made the same theory that his remains now lay under a car park in the middle of Leicester. With the support of several organisations including Leicester Cathedral and the University of Leicester, the Richard III Society lead by member Philippa Langley started to excavate the car park. In February 2013, it was confirmed that the male remains they had found in August 2012 were in fact Richard III. 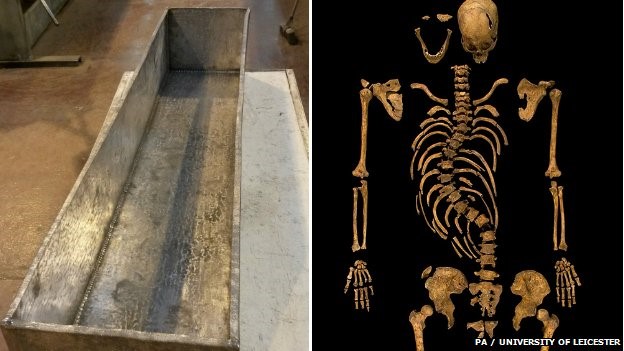